Access to an AED is the Key to Surviving Cardiac Arrest 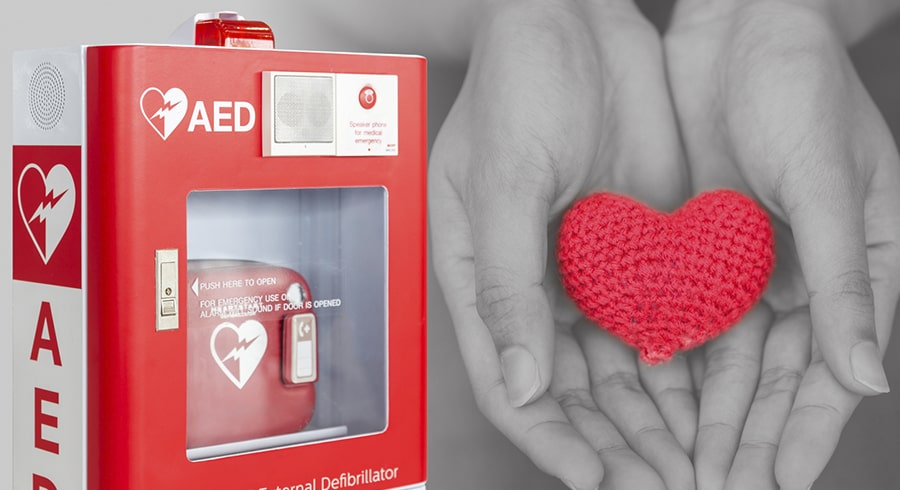 Minnesota is known as the “State of Hockey,” and might be the one place in the U.S. where the sport is as popular as it is here in Canada. A northern state that shares a border with Manitoba, it’s not uncommon to see entire communities come out to the arena to support local hockey teams.

Kevin, a part-time hockey referee, had grown up playing the sport, and now in his forties, enjoyed having an opportunity to continue participating in the skill and energy of a great game.

A Saturday night in November of 2010 started out as any other night at the arena until the end of the first period. As the second period was about to begin, Kevin remembered feeling dizzy, and then having the sensation he was going to fall. The next thing he remembered was waking up in an ambulance and a paramedic saying “Welcome back” to him.

What he missed in between those two crucial memories was the frantic but quick-thinking arena manager grabbing a small, portable machine called an AED that was installed nearby on the wall. That AED ultimately saved Kevin’s life when he went into sudden cardiac arrest. Without it, the warm welcome back Kevin remembers might never have occurred.

Unlike a heart attack, cardiac arrest occurs when the heart stops functioning abruptly, and with little to no warning. An electrical error in the body causes the heart to go off its normal rhythm, which then prevents the heart from pumping blood to vital organs.

The most frightening thing about cardiac arrest is that it can happen anywhere, at any time, to someone of any age. Recent statistics indicate that in Canada alone, someone goes into cardiac arrest every 12 minutes, and when someone experiences a cardiac arrest, every second counts. Each minute that passes without AED application decreases the likelihood of survival 7-10%. Therefore, immediate access to a reliable AED unit, like the Phillips HeartStart line and the Zoll AED units, is crucial.

How Do AEDs Work?

AED’s have been described as “portable paramedics” for a reason. AED’s (Automatic External Defibrillators) are small, lightweight, life-saving devices that send an electrical current through the chest wall of someone whose heartbeat has gone suddenly and dangerously off rhythm.

Using electrical power derived from either batteries or an in-device capacitor, the electrical jolt is transmitted by wires to the adhesive defibrillator pads attached to the chest wall. The AED then emits a jolt that attempts to set the irregular heartbeat back on the right course

Why are AEDs so Important?

For those experiencing a cardiac arrest episode, having an AED nearby in their moment of crisis is invaluable. Even in well populated areas where emergency services are nearby, it still takes first responders an average of 4-6 minutes to arrive at the scene of an emergency call. For someone suffering from sudden cardiac arrest, those precious minutes waiting can all but destroy their chance of survival.

Consider the following recent statistics from the Heart and Stroke Association of Canada:

When and AED is utilized in conjunction with CPR immediately following a cardiac episode, the likelihood of survival is 75%.

Numbers like these are clear indicators of how necessary having AED access is in public locations, buildings, schools, and other common use areas. All publicly placed AEDs also come with 5 supplies to help/protect the rescuer. A pair of scissors, towel, gloves, breathing barrier device, and a razor can be found with the AED.

That’s a valid question, and one that more people are asking throughout Canada.

While some provinces, like Manitoba, have secured legislation like the Defibrillator Public Access Act that require AEDs to be present in places like schools and universities, airports, fitness gyms, and community centers, most of Canada still does not require places like office buildings to have an AED on the premises.

Luckily, more building and business owners are realizing the importance of having an AED on site. Recent numbers indicate that the number of AEDs in Calgary office buildings has increased by 33% since 2016. Additionally, the advent of the Covid-19 epidemic has prompted an increase of personal purchases of AED units for the home. Since most sudden cardiac incidents occur outside of a hospital setting, these are encouraging statistics.

Groups like the Heart and Stroke Foundation of Canada are also encouraging people to share information about AED locations via their personal social media and using apps like PulsePoint to help people find a nearby AED unit in the moment of crisis. All of these are vital steps in educating the public about sudden cardiac arrest episodes and the need for life-saving equipment like AEDs to be just a heartbeat away in a life-or-death situation.

Based On Provinicial Location