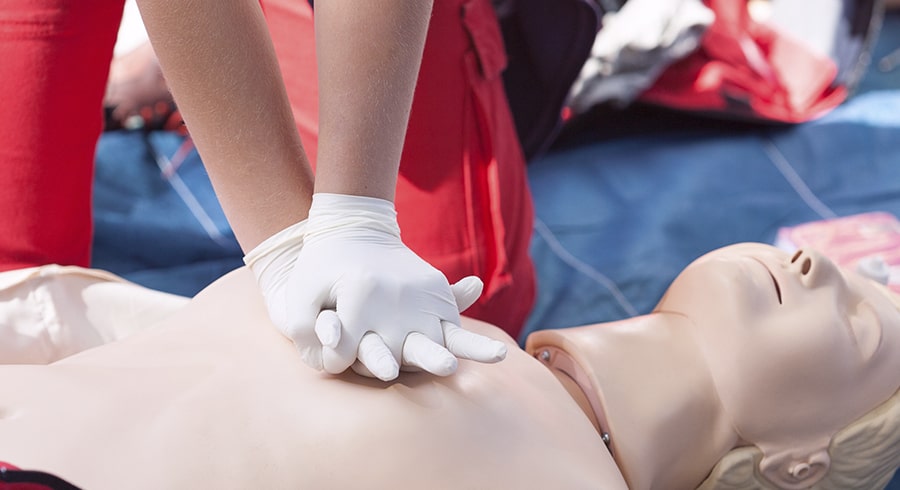 She is said to have the “most kissed lips in history” but it might surprise you to discover that Resuci-Annie’s origins didn’t indicate she would go on to be the vital life-saving tool she has become.

It begins with a sad story. Some 150 years ago in Paris, France, a young, unidentified woman’s body was recovered from the River Seine, having succumbed to what was ruled a suicidal drowning. Her beautiful, placid face was intriguing to the pathologist who examined her. He found it tragic that such a lovely young person would have died so young and now, be buried without an identity. He commissioned an artist to make a plaster mold of her face to appear in the newspapers of France, in hopes that someone might claim this youthful victim.

Sadly, no one did. But that didn’t stop Parisiennes who saw in her lovely visage the same intriguing work of art the pathologist had. She was dubbed “L’Inconnue” (the “unknown”). It wasn’t long before her enigmatic death mask became the subject of for many artists, poems, and books. In fact, her popularity was such that at one point, no fashionable home in Europe was complete without a mask of the “L’Inconnue” on their wall.

Now fast-forward to 1960., when Drs. Bjorn Lind and Peter Safar approached renown dollmaker Asmund S. Laerdal with an interesting proposition. The doctors had created a new concept of mouth ventilation coupled with chest compressions that they believed could be a true medical breakthrough for victims of heart attacks and other cardiac incidents; the only issue was, they were having a difficult time finding a proper way to teach the method to other medical professionals. Knowing that Laerdal’s dolls were so popular because of his use of soft “flesh-like” plastics, they thought he could perhaps design a life-size doll for them that would allow medical students to practice the method and get a real feel for the procedure, the needed pressure of the chest compressions, and so on.

Thus, the Resuci-Annie” was born.

Since then, countless variations have been created, including an infant-sized and torso model have been created as well as significant improvements made in both the quality and capabilities of the models.

Today, the Laerdal® QCPR Training Manikins are the best CPR (Cardio-Pulmonary Resuscitation) instruction tools on the market. They combine the best quality in both reality-based look, feel, accuracy, and reaction along with top-of-the-line reporting technology, to ensure that first responders have the best tool available to properly administer the “kiss of life.”

What is the Laerdal® QCPR Training Manikin?

The current stats on CPR are both incredibly encouraging and somewhat dismaying at the same time. For example, when a person receives CPR within the first minute of experiencing cardiac arrest, their chances of surviving nearly triple. However, this is when CPR is performed correctly, and the numbers on that aren’t nearly as positive, even when professionals are performing the actions. According to a Harvard study that tested nearly 100 medical professionals performing CPR, 28% performed compression rates at too slow of a speed, and 40% of the compressions were too shallow. Professionals didn't get the ventilations right, either. During 60% of the 30-second intervals, patients were hyperventilated.

Another study sheds some additional light on civilians performing CPR, or rather, why even those who have been trained in CPR might NOT use their training when called to do so. Of the 300 CPR trained civilians polled, as many as 47% of them said they either have been or would be reluctant to perform CPR on someone who needed it for fear of doing it incorrectly.

Why is the Laerdal® QCPR Training Manikin Important?

What makes the QCPR manikins so important is that they provide real-time performance review to students on proper procedure, particularly in the areas that are most susceptible to error, like chest compression depth and speed. The Laerdal® QCPR Training Manikins are equipped with Bluetooth® and connect to a training module that allows instructors to monitor the performance of students as they’re practicing their technique. It is also made of a durable, molded skin that is both an excellent simulation of the real thing and exceptionally easy to clean.

The Laerdal® QCPR Training Manikins provide students with real-time course correction on many of the most important factors of performing CPR. While performing chest compressions, students will hear an audible click that confirms they have reached the correct depth, and the app monitors the rate of compression to ensure the target of 100 beats per minute is reached.

Additionally, the Laerdal® QCPR Training Manikins give feed back on respiratory performance, ensuring that students have properly performed the head tilt to open the airway, and are fully respirating the lungs without hyperventilating the manikin.

The app is built to connect to as many as 6 Manikins at a time, but it is also possible for students who want to perfect their CPR technique to use on their own.

CPR is one of the greatest tools first responders and the public alike have in their arsenal when it comes to providing cardiac arrest victims with a chance at survival, but if it’s not performed correctly, precious, life-saving time is wasted. As the clock begins ticking immediately after a cardiac arrest, knowing the proper CPR technique, and administering it as quickly as possible ensures that clock is being used to give a cardiac arrest victim the best possible chance at survival and recovery.

Based On Provinicial Location